From Cynthia after another bazaar Order that just baffled prosecutors investigating Perry on a murder and sicko peeper group:

“The same police investigating Charles on a murder, and a sicko peeper ring group that gave more specific info contained in the attached email regarding Judge McNamara, who I never met because she did not attend events and I had to Google to see even where she was as I thought she was here, same police that recorded Defendants at 3:56 am talking about how much Phillip Wischkaemper at LPDO has access to as far as evidence, the same police that recorded Defendants at 1:30 am Saturday night discussing where my car was parked, same police that recorded Defendants discuss having the court reporter change transcripts, their intent to steal my car and force me to sort it out later, their intent and carrying out of taking my social security card did not ignore my evidence and gave more of their own are not allowing the Judges who did ignore my evidence and did question why rulings are off are about to lock these people up and I can get all these bazaar decisions overturned.
Same police that recorded Charles Perry more than once asking how he might arrange a false arrest or kill me without it being linked to him so he covers up this peeper sicko business of his where he trolls around while traveling alone without his wife and no alibi seeming out single women as victims, hires a lock smith to break in so there is no sign of forced entry, and a guy to install cameras so he can sell them as “watch time” on the net giving him $15 million, not something a small town accountant could make through legit business, to pay off these Judges. Women who have minor children on the home are a reality show without their knowledge and/or consent. We have a specific amount he has spent. You cannot hide where you spent that kind of money so Perry for sure wants me out of the way so he can go back to business as usual. It’s a Federal crime and RICO violation to tamper and retaliate against the victims and witnesses of a crime. Coercion is a Federal crime and of course bribing judges is as well.
The same police that recorded Matthew Powell telling people I torpedoed his case, it never occurred to him I might be telling the truth, “we have got to get her served”, he knew the first arrest was a terrible mistake and he wishes he had not done it and his professional liability insurance did not want to indemnify him.
Those police have prosecutors. Those prosecutors are not cool with my evidence being ignored and have their own overwhelming stack, and now have included judges in their investigation. What’s going to happen is they all go to prison and all these bazaar orders get overturned and will be used in criminal court. They are gonna win…criminal charges is what they win. They want to harm me because I know too much about the criminal activity. It’s just more crime, cover ups and tampering and intimidating victims and witnesses. For people who keep looking for leaks and investigators, undercover, they are not putting it together on their head they are being investigated and have leaks. They can lie as they have been and say I’m crazy, and no one really expects them not to. That is what criminals do. There is like four counts of perjury so far so we expected nothing else but that they would lie. It is what criminals do. Evidence and material facts say something else.
From The Desk of Cynthia Ortiz
(918) 401-0724“Defendants have had Undercovers all over them all the time for years, they know because they keep asking Cynthia for more info which by law she cannot give and would not give if she could. She wants for Perry to be GONE from her life so she has no motive at all to give him a thing. He’s brazen which means he’s been at this a long time and gotten away with it. Cynthia has police protection from Defendants because she needs it. 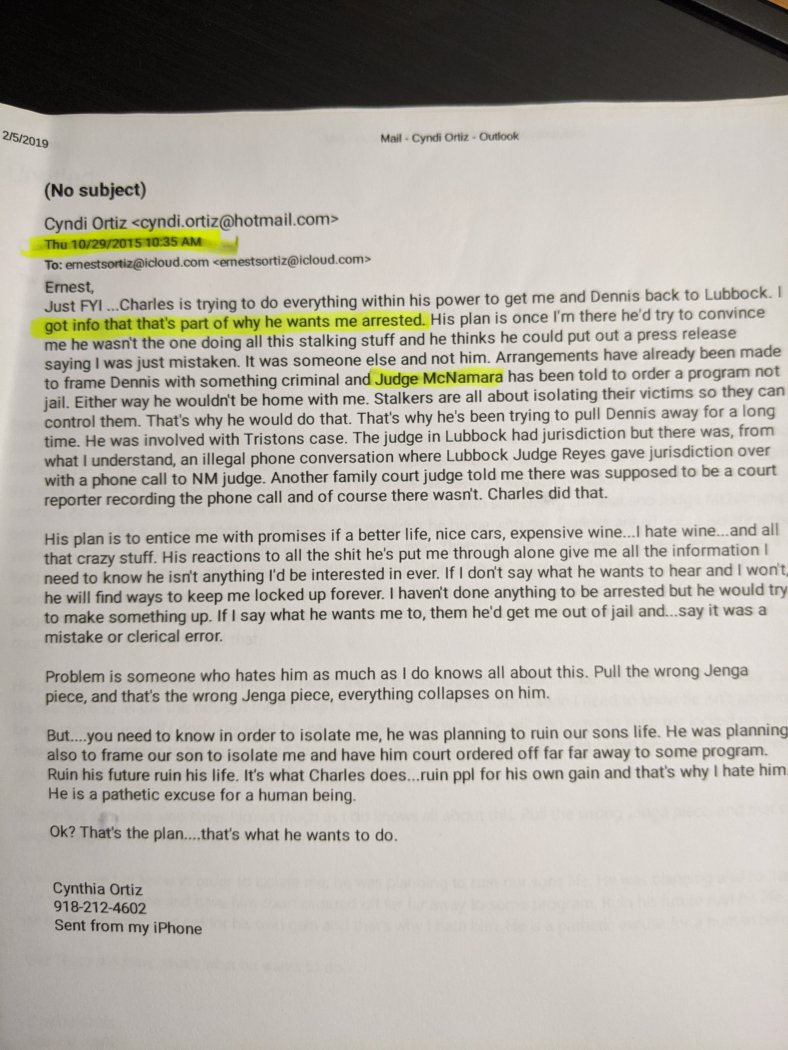