Now Perry threatens Cynthia with some sort of Fraud Allegation. Perjured himself three times and then threatens her with fraud allegations.Perry then tells Cynthia he can help her.

Perry complains when he’s leaked on or caught but he’s been told and told and told he’s under investigation. Police are fully aware that he sits around all day harrassing Cynthia, threatening Cynthia and of the risk he poses. He’s been told he’s got cops all over him and he still won’t stop. Then complains when he’s caught. Getting probable cause to a Judge to Order investigations expand or continue is easy because that’s what Perry does all day. They know, as does the Judge, he harrassess Cynthia and harrasses her and harrasses her constantly. The Judge asked how she stays sane. That’s how bad the evidence he saw was. This would be criminal court not civil. It’s bad. So for numbnut not to get that he gets caught because he’s under investigation and won’t stop, speaks to that mental retardation problem he has. Perry tours his civil wins, throws that in Cynthia’s face one minute, but is not getting what’s here and what that means for him. He’s not putting that together in his head. We don’t know why but for some sort of mental retardation. Everyone else got it in like a second. The Judge on the criminal side granting search warrants and such got it in what Perry does to Cynthia constantly in less than a second. It’s not that hard. But when you have her repeating verbatim what these guys say and are trying to do to her, like the McNamara email, and many others subsequent, get pissed about that getting out, you know you have police on your ass, and have not the good sense to stop, whatever happens in that legal aspect, you really had coming. You really just had it coming. She asked him to stop!!! She is icked out by Charles Perry not turned on. He’s ignoring her rights and wishes and imposing his own on her and his own kids. She said “NO! STOP CONTACTING ME, STOP PEEPING STOP HACKING, GET AWAY FROM ME!!!!” and the cops know that, the judge knows that and everyone knows it. Most people just move on and never need any cover up much less a $25 million failed one, and here’s Perry while knowing he’s under investigation, has been caught more times than we can count, saying he can’t stop. He can’t control himself. He said he has no power. He can’t control his delusions or his sick. It controls him. He doesn’t even make sense in a great deal of what he says up here. So his newest threats of some sort of fraud allegations are very very bazaar and again these cops know of his constant harassment. Enough evidence went to the Judge to get his comments of “How does she stay sane with him doing that to her?” And everyone figured out Perry has a problem in like a second even he’s slow.

Uummm, we are not sure what planet he lives on but officers got this info to her, the puzzle while she was in jail, when Perry had her false arrested as threatened in the McNamara Email posted here, she sent months before he carried out his threats, smeared her, agreed to leave her one, then right back at her with threats, intimidation, coercion and harassment, charges were dismissed against her in her favor as there was no crime. He had her charged in Texas for doing something required by law in Oklahoma. It’s a requirement to get a Protective Order. The puzzle has the man’s name on it that she wants in her life. Perry is an intruder not an invited guest. After she has all that, from police he has no power over, he actually asked her if she needed his help. Talk about delusion!! The next minute he asks her who his leaks are. Leaks give probable cause. Who needs whose help here? If he wanted to help, he’d get out of her life and never contact her again rather than pissing everyone off, bothering everyone, and wasting everyone’s time. He has no life so he’s got all kinds of time. Cynthia watched him hand all his work off to employees so he has nothing else to do all day but waste other people’s time and bother people with his weirdo problems and drama queen act.We have to repeat this over and over for fucktards that can’t get it in 20 seconds like the rest of us do: Cynthia does not like Charles Perry. He’s gross, perverted, deviant, sick and weirdo. He’s not a turn on, not hot, not sexy, he’s a reject. She left in 2013 to get away from him and avoid conflict. He’s an intruder in her home and life, not an invited guest. He’s stupid and delusional and not capable of being normal or convincing her of anything at all. He has no life or he’d be busy with his wife and kids and his own friends and family and would not have time to bother everyone in Oklahoma with his problems and drama. He’s wasting people’s time. He’s a menace. He annoys. People might like his money but they don’t like him. He’s got leaks because people want this stopped so they help the officers active in gathering information and evidence to put a stop to this guys crazy. He never shuts up. It’s like he’s on cocain because no one spends that much time menacing as Perry does. He’s wasting people’s time. We are all busy because we have a life. He needs to get one and get busy living in reality. He’s not liked a d his criminal conduct not tolerated in Oklahoma because we don’t have to put up with that crap. They might accept it in Texas, but not here. Cynthia has help and protection from Perry because she needs it. If she has that, and that provided what is posted here plus more, she clearly has no need for creepy Perry. He has no power or he’d be gone out living and too busy to sit around all day bothering other people with his problems and drama. He has leaks because of the high level of aggravation about the devastation he’s caused Cynthia and other people trying to cover up his crimes and he knows it’s wrong or he wouldn’t do that. He’s a reject. It’s a crime, not a relationship. He’s a reject too stupid to just go be normal, and move on.Perry can know officers are watching him commit a crime and he does it anyways, then gets mad that he’s caught. The level of insanity in his conduct and words is not even something any normal person can relate to. If you have a normal mind, try as you might, you can’t relate. He’s that crazy. There is no rational thought in his head. Why would you complain about being caught one minute and the next be told straight up, cops are watching you, and just do it anyway???? Talk to a brick. Same results as talking to Crazy Perry.

DISCLAIMER: We have been told Perry is claiming he is a victim of harassment due to his actions being confronted here. We understand it’s “content specific” . He is going to have to take that up with the police and psychologist directly when they are ready to confront Mr Perry face to face. They know the catastrophic losses he’s caused other people and hardly see him as the victim of anything. This is in part confronting him for his conduct that is criminal and if he does not like being confronted, then he should stop. That is the only solution. Bill Clinton, Harvey Weinstein, Anthony Weiner were all subjected to decades of harsh ridicule on show Saturday Night Live and this is hardly that. For him to act like he is different and a cover up is a civil right is outrageous but typical of someone with a very messed up mind. There is not one set of rules for Perry and another for everyone else. Perry has hidden his criminal activity for decades. It’s accepted in Texas. It’s not being tolerated in Oklahoma and some other jurisdictions. No woman is okay with being Peeper raped. It’s a serious sick perverted crime and it is a crime because it’s extremely offensive. Perry’s contact with Cynthia is unwanted and bazaar. Confrontations and facts addressed are appropriate as is justice. If he didn’t like that he would stop. He held a series of ex parte hearings in secret where nobody knows what he said and he couldn’t be cross examined or be confronted with evidence for a reason. That’s not transparency or even legal. If he does not wish to be confronted or even investigated or even arrested for stalking a woman who changed careers and moved twice to get away from him and avoid all conflict, he would stop. That is the only solution to his jam up. If it’s here, the judge on the criminal case has already heard it as have the team of investigators and a few trusted reporters. If it’s here, the judge on the criminal case has already heard it as have the team of investigators and a few trusted reporters. That would include the inappropriate and illegal conversations about who told, proxy servers as to who posted here and pin pointing Cynthia’s location. Harassment of a material witness, stalking and harassment, menacing, peeping, hacking, attempted murder, conspiracy to arrange a false arrest, obstruction of justice, destruction of evidence, judicial misconduct would be the crime, not the reporting of that crime to the public, law enforcement or to anyone at all. First and foremost is the public’s right to know. Cynthia has the right to directly or indirectly protect herself and divulge any threat or information that would threaten her safety and well being. That is a civil right and it established intent of Defendants to cause her injury. Defendants do not have the civil right to cover up their crimes. 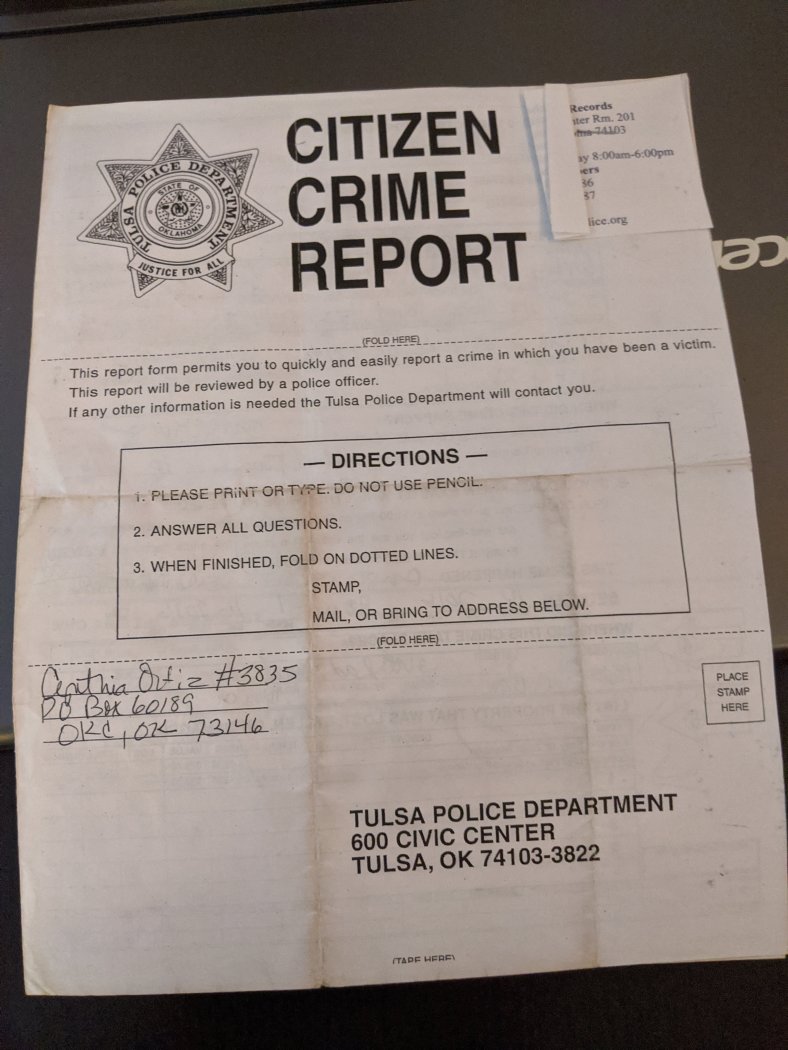 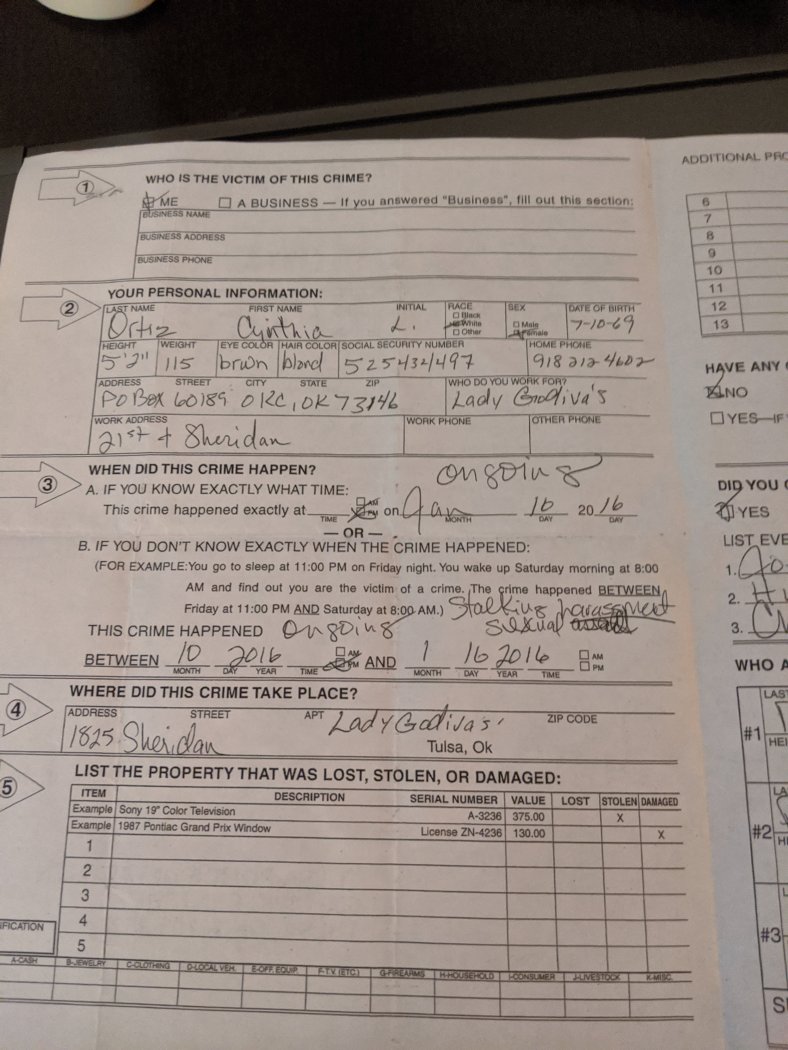 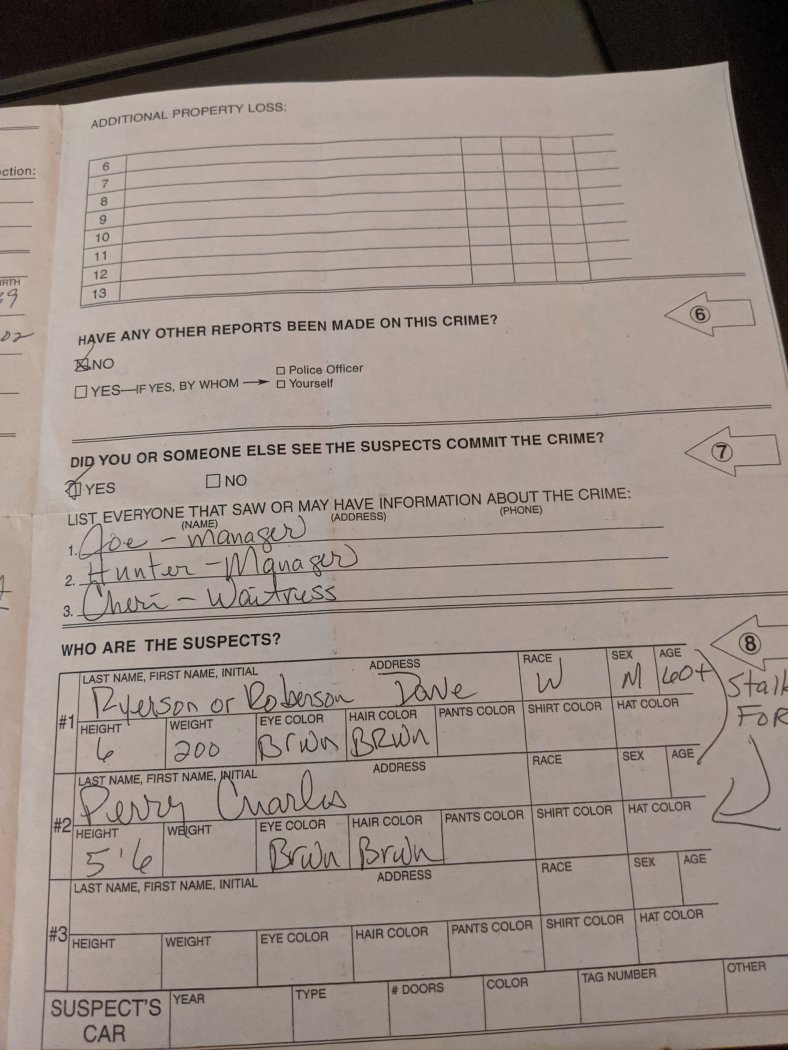 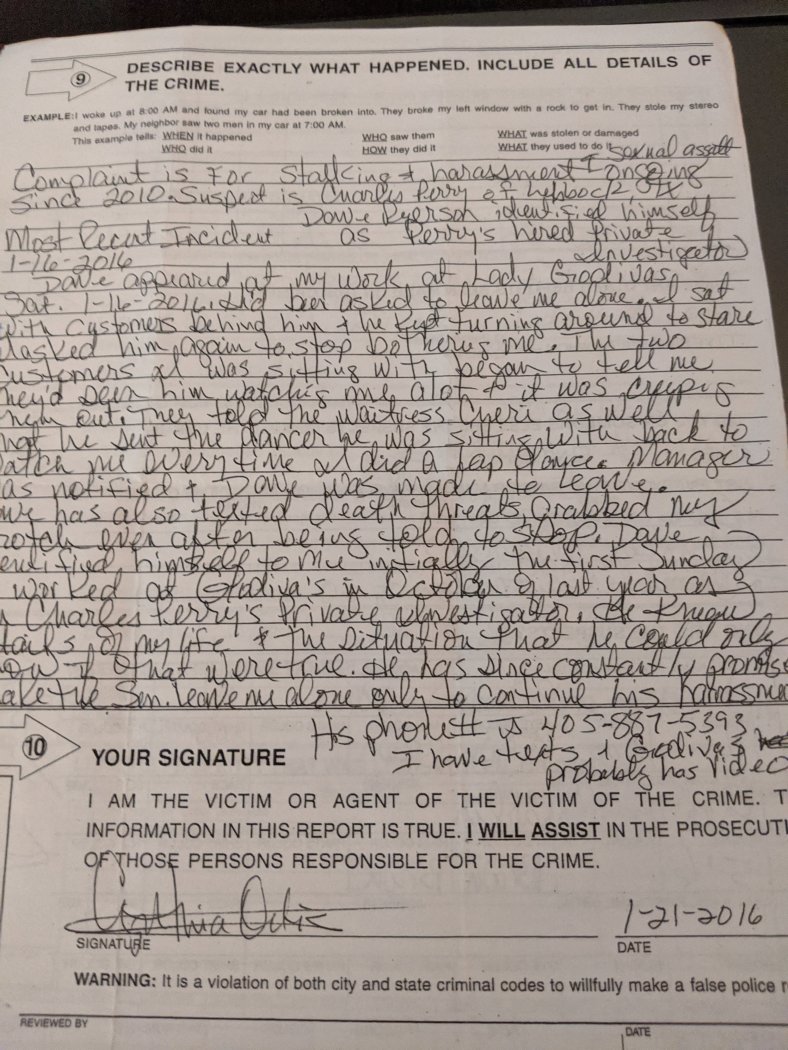 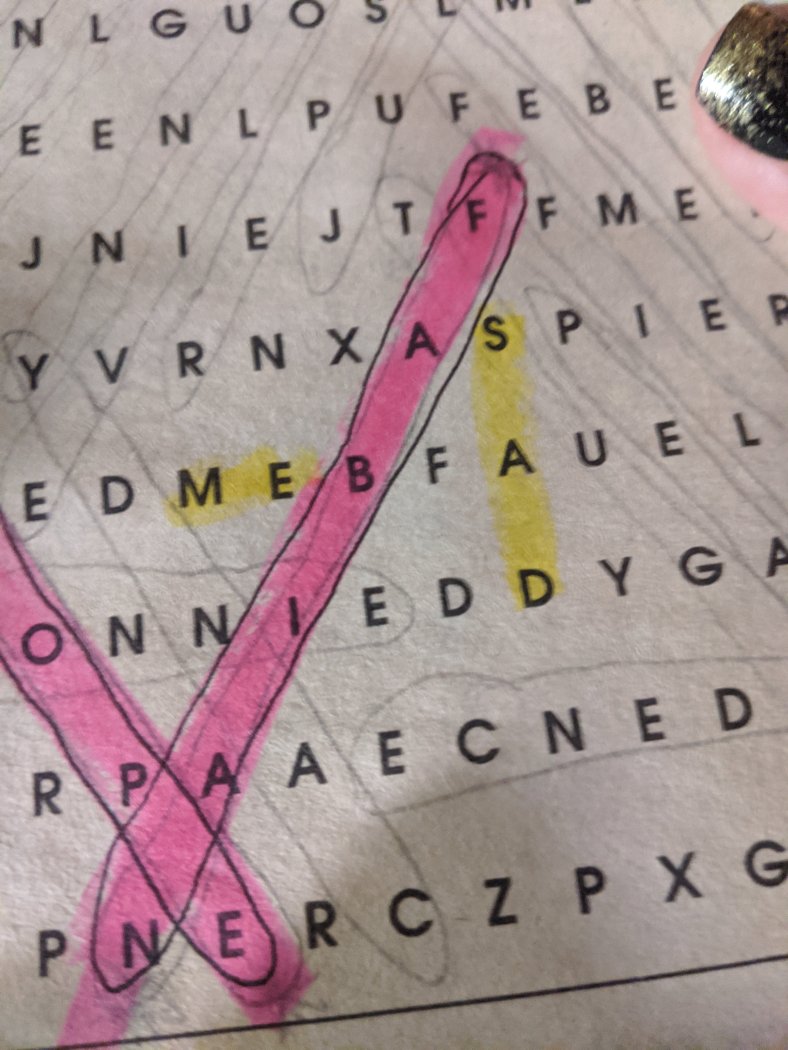