Officers investigating Charles Perry on another matter comment on the lack of rationale being used in his cover up. They stated “Charles cannot call all over inquiring where Cynthia received training to run a sting op like she does one minute then do things to her, attempting to be sneaky about it, and expect her not to figure it out. He cannot treat her like she was born yesterday one minute then ask where she was trained to sting op the next and then expect to be taken seriously. He also cannot claim he is not sending proxy stalkers to harass her at work or set up some type of entrapment scenario or ask her personal questions to get information he uses to hurt her then claim under oath he is not doing that and has no relevant business contacts in Oklahoma that are causing injury. He is being sued for tortious interference, grand larceny, conversion and intentional infliction of emotional distress for doing that very thing. He cannot commit a crime against Cynthia or plan to, get caught, then start asking about who told on him, then claim he is not committing a crime against Cynthia and this is all he’s done now for years and frankly the only thing he has accomplished is building one big corruption case and he creeps Cynthia out. His continued acts of coercion attempting to force her or intimidate her or bribe her into dropping her law suits are the reason she filed them to begin with. She told him to cease all contact and that includes requests that she drop her law suits or intimidation tactics, interference with her income or ability to fight him off of her in court. He is simply giving her new causes of action and showing consciousness of guilt. A cover up is an act showing consciousness of guilt and he has not covered up anything at all in fact for the first time in his life, he has greatly assisted in helping to build a public record of his criminal conduct and that would include improper contact with some judges involved in all of this. He is not aware of which judges are informants and which ones are not. He just keeps asking who told and yet continues to give us things to tell. There is no logic in what this guy does. Causing injury to Cynthia, and specific injury, which she’s been warned about prior to the event, an event which constitutes by law, a criminal act, and establishes for the record that the specific act is premeditated, then he commits the act he cannot then claim she is delusional and you would think he would put that together in his head. He never does. It’s been awhile since we’ve had one this delusional, this weird, and this stupid. That is the reason he is in the jam he is in and attempting to coerce Cynthia into dropping her suits which frankly lets us know we are on the right track. He has created a tremendous amount of animosity towards him in the way he has sadistically attacked Cynthia and that has helped us get information so much easier than we ever expected. Nobody likes a bully. Normal people want Cynthia to be happy and not have to be burdened with Charles Perry’s drama. They want her to be with the man she wants, working wherever she wants to work, making the money she wants to make, her family close again, her friends close again, her privacy back and Perry and his mess gone. No normal person wants to hurt another. Charles Perry is not normal in fact our shrink describes a deeply depraved sick individual in her analysis after thorough review of Cynthia’s case. She has stated ‘You would think Charles Perry in his position would at least try to prove me wrong. He has not and in fact he has become worse over time. He has not even tried to prove he isn’t severely delusional, sadistic, antisocial, psychotic, sociopathic and that tells me he is more mentally ill than we even knew. He can’t. He is not able to prove me wrong even for a little while. Most sociopaths learn to feign compassion and learn behavior skills to save face. He does not. He does not even try. That means he is not able. He can’t. That is what scares me for Cynthia. ‘ We are watching out for her as we have been all along while we finish up what we are doing. Perry is a menace and deeply disturbed criminal and there needs to be justice for his victims, not just Cynthia. We have allowed some room for locals but that cannot go on for long. Perry needs to be stopped. We are not going to tolerate the vicious attack of women and children and frankly it’s a disappointment and a black eye for all law enforcement for any law enforcement to allow such things in a civilized society. ”

All he had to do is leave Cynthia alone as she has asked for over half a decade. Cynthia is creeped out by Charles Perry, not in love with him. Whatever imaginary affair he created in his mind exists only in his mind. It certainly does not exist to her at all. He makes her skin crawl. No contact means no contact and the more he demands she drop her law suits the more she has need for them. Any person of average intelligence could figure that out and control themselves to stop.

The question is not who the confidential informants are. If you have to ask that question, you pretty much just confessed to committing the crime informed. The question is why are you committing the crime to begin with? Setting expectations based on some sick fantasy then being disappointed when those expectations are never what you hoped for speaks to and establishes the fact that individual is not operating on a full load and is stuck in some deep delusion world and is not able to get a grip on reality. You don’t need to cover up the cover ups when you operate from a normal intelligent mind and have nothing to hide. You don’t need to bully, intimidate, coerce, impede, obstruct and all the racketeering type activities one does to cover up criminal conduct. Prosecutors have reviewed Cynthia’s civil cases and more than one came to the conclusion there is ample evidence of improper judicial contacts again, not needed if there is no crime. Cover ups produce evidence of a cover up and these officers investigating Defendant Perry and Cynthia have been very successful in bringing out his criminal conduct for the first time in his life which would not have occurred had he acted like a normal man, respected her wishes and left her alone. He seems not to be capable of putting that together in his head like any other individual can of average intelligence. So what’s wrong with his mind that he is not able to apply just common sense logic? People want Cynthia to be happy and not burdened by Perry’s unwanted criminal attack and his drama and mental problems all day every day. There is great deal of animosity against these men for failure to comply with the law. That is the reason they have leaks and yet while asking who it is leaking, they continue doing all the same things that have them so jammed up they need to coerce and intimidate. It is insane to do that. It is insane. No normal person acts like that and expects things to work out like they want but for delusion. Nobody knew Perry had a creeper problem six years ago and he has had a creeper problem and worse all his life. If he were not scared to death of these officers and Cynthia and what incriminating evidence they may have he would not behave corruptly, threaten her, intimidate her, invade her privacy, retaliate and all the things criminals do when they are caught. All he had to do is leave her alone. Big powerful guys are too busy doing big powerful guy things to have time to pervert around on women that don’t like them. So what is Perry’s problem that he can’t? The shrink is right. He seems to prove that true more by the day and is not capable of stopping on his own. He can’t do it. He has no power or control.

You cannot say under oath in court “I have no contacts in Oklahoma, then ask “Who told on me? Your family? Your co workers? ” Which Defendant Perry has done repeatedly. It simply gives rise to the question “Why would Cynthia’s family or co workers know anything to tell because you just testified under oath in court that you are not contacting them? ” Defendant Perry is forcing himself on a woman that cannot stand him. Erotomania seems to consume him. He is imposing his nutty all over her, people in her life and frankly his own family too. His family does not want him in Cynthia’s life any more than she does. Pretty self absorbed and not respectable in any way at all. Those suffering with antisocial disorder, meaning they are socially inept, ignore the rights and wishes of other people and as the shrink said, Defendant Perry has made no effort at all to prove he is not suffering from erotomania, antisocial disorder and sadism. He has not even tried and in fact has done everything for nearly a decade to establish he does suffer from these very disturbing mental illnesses. Cynthia rejected him. She does not feel love for Charles Perry and she has made that very clear and we’re he normal he would have respected her wishes and left her alone and moved on and would not then be in the jam he is in leading to corrupt acts that constitute racketeering. It is what it is.

Perry has threatened Cynthia’s life, safety, well being, to take her car, force her back to Texas so he can control her, again all acts of coercion, unwanted contact and just more freaky Jason stuff he has been doing all his life. He just got caught on this one. 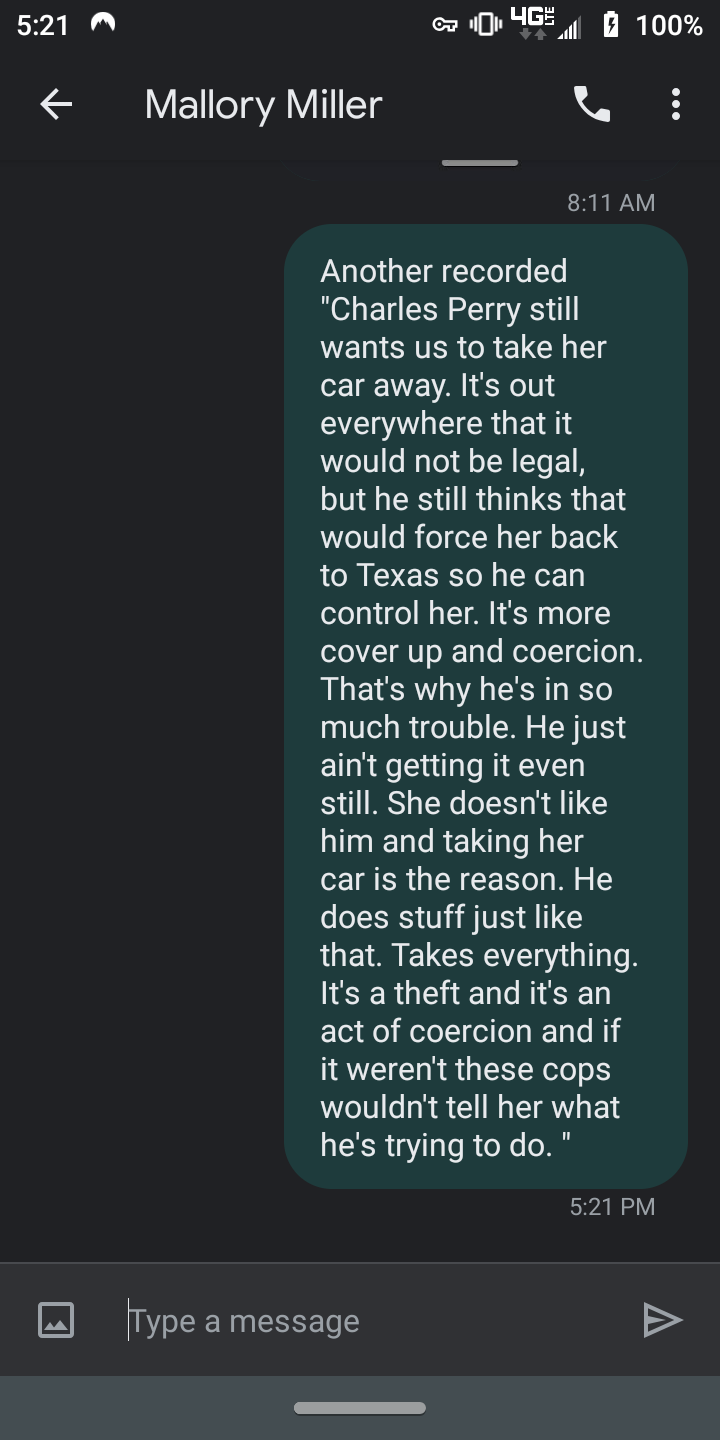