Perry and Powell have Ortiz by far out lawyered, out financed, and have claimed they have an indictment against Ortiz again, in attempt to retaliate, coerce and intimidate her into a lie, pending current ongoing appeals. Ortiz has not a lick of law school and Perry has engaged in continued stalking and harassment outside of Court and very nearly starved her to death. She has evidence on the Court records of regular customers that suddenly stopped coming in and stopped communicating with her, just after he made a specific threat to again interfere with her income. He has her living in poverty in order to prevent and interfere with her ability to even fight these guys in Court. She has but barely. She has filed an appeal with the US Supreme Court, who only hears 1% of the cases they receive. These men have millions, they have five or attorneys, and she has none of that. She is for sure the underdog so a denied appeal hardly makes her a criminal. It makes her the underdog.

As a matter of law, she is the victim and witness of a crime. Perry threatened her with death and false arrest, long before he actually carried out those premeditated acts which are criminal acts and did cause injury. She was being poisoned. She wanted to again attempt to get a protective order and not die. She filed a police report. Perry and Powell then charged her with “filing a false police report in retaliation for a public servant doing his job.” His job does not include trying to kill someone. There is no evidence of a political attack and that claim is nothing more but more of Perry’s delusion. She complained in texts and emails and facebook messages going back to 2011 of him pulling up behind her home, not part of his legislative duties, sending aides to social events where she was or flat showing up himself. He sent his daughter to social events. Friends confirmed they saw it too. All of this is documented way back to 2011 long before she could have foreseen current events. The law in Oklahoma requires the filing of a police report when seeking a protective order from a stalker. She simply acted in the best interest of her safety and well being, and for her life and that of her son’s, who was a minor child living with her at the time and in compliance with Oklahoma law and they knew it. Its right on the first denied order. They did stop poisoning her, once she filed the police report. They then had her arrested, just as Perry threatened, impeding the police investigation in Tulsa, and preventing her by physical force from reporting their crime and providing evidence. They then made her sit in Lubbock jail, illegally detained for two months and during that two months, never once had her blood tested. You’d think they would due to their need for vindication and to prove their case. Instead they had her tested for mental competency, which she passed, twice. They let the evidence of poison work its way out of her system causing the loss of the evidence that they were trying to kill her. She sued and the matter appealed to the US Supreme Court. They’ve been caught more than once contacting judges to get an order of denial that goes completely against prior court rulings. Again, denied appeals hardly makes her the criminal. It makes them the criminal and in violation of the RICO Act. They knew she had no choice. They knew she was being poisoned because they were poisoning her otherwise, they would have wanted to be vindicated and had her tested. They avoided it, they destroyed the evidence, they retaliated and they prevented and impeded Tulsa Police from getting that forensic evidence and the video evidence as well. She had not talked to a detective and wanted to wait to file the motion for a protective order until she had results of the blood test. It would strengthen her case had she been able to get a forensic blood test from TPD to take before the judge. She was never able to. They had her false arrested and dismissed the charges. They first attempted to coerce her to lie which she refused to do. They then had her tested for mental competency when she would not cooperate with their cover up, to discredit her. She passed. She was then required to see a psychologist for a year and a half, which that mental health professional, after a year and a half, never came up with mental illness and in fact stated Ortiz was no harm to Perry, simply had made every effort to get away from him and that her arrest was a stalking escalation. These statements have been filed with the courts as evidence. They then came to an agreement that Perry would never again contact her, if she agreed not to go to media with details of her false arrest. He had to first admit to guilt in order to agree to stop and the evidence of that agreement is in her bond conditions. IN two years of litigation, not once has Perry ever denied having to given his full consent to the order stating he may not ever contact Ortiz again. The second she returned home, he began again threatening her with death or false arrest. She emailed friends and media. Those emails were then forwarded to Perry, then Powell, then given to her attorney. Powell advised her attorney to “shut Ortiz up”. She then sued for breach of contract, and again, against all facts, law and case law, the matter denied and on appeal with the Tenth Circuit. He again claims he has an indictment, for what nobody knows, pending appeals outcomes. Again, she is the underdog, not a criminal. She is the victim of his crimes, not the other way around. She just would not and will not be coerced and harassed into lying for him. She will change her testimony. He is trying to force her to.

Perry claims to have new evidence, but will not make the evidence available and the belief is the reason for that is that the evidence is not valid or there is nothing to it, and Ortiz can debunk.

UPDATE: Info obtained just after this blog was posted:

Matthew Powell was recorded stating “We were trying to say she is a repeat offender on retaliating against us for our jobs.” He was told “You can’t do that. You did impede a police investigation in another state. You did obstruct justice. You did destroy her evidence. You did arrest her for complying with the laws in the state where she lives. You did all that.” Ortiz has filed a Motion for a Protective Order against all Defendants and had to file the legally required police report. The motion is part of the pending State Court Case, CJ-2018-02775 Ortiz v Perry, Malicious Prosecution/Aggravated Assault Case

Defendants have been under investigation for some time, initially, starting with Perry on another matter. Ortiz said of the investigation: “These guys have protected me from their intended premeditated harm over and over for the past six years. My arrest was allowed because that is the crime, not what I did. It was allowed the same as a narcotics buy is allowed, just this is a white collar crime. They shouldn’t have to protect me like they do, but thankfully they have. They record these guys somehow and play it back for me and Perry has been recorded more than once asking someone to find a way to kill me or arrest me again, without it being linked to him. What’s nice is that I don’t have to explain or defend myself to these guys. They contact me to tell me I’m in some sort of danger. I don’t have to convince them of anything. They are telling me when I’m in danger.” In March, 2014 when she initially talked with them, they told her, “We know Perry hacked your phone and types in it “call me”. Never call him. Its a trick. He wants to take it to his DA friend Matt Powell and claim you are harassing him.” This has been ongoing for that long. Current scrutiny is on judicial decisions that do not comport with the law, facts or evidence or prior rulings. These men must really just have no life to attack her constantly the way they have. Perry’s actions comport with the article giving information on mental illness in stalkers below:

The link below is the page containing pleadings and evidence filed with the Courts. The case give Ortiz’s timeline of events with evidence in support of her claims.

Below is a list of documents cited herein and they been filed with both Federal and State Courts as well: 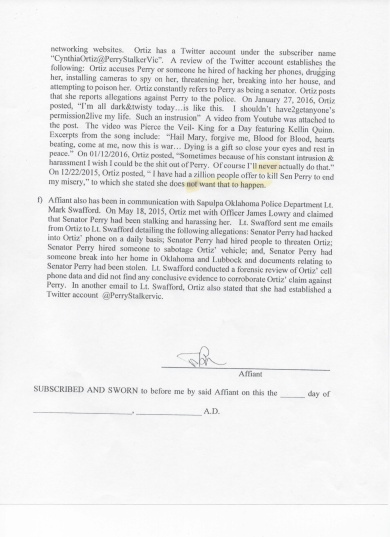 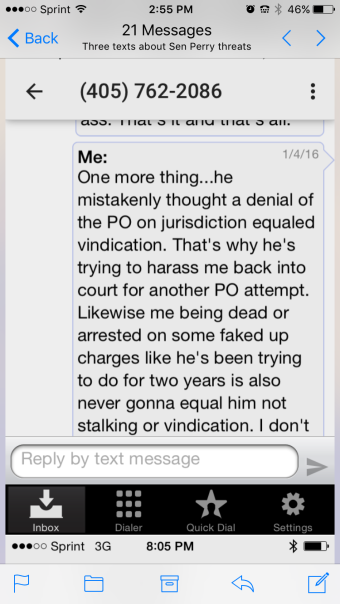