Its been no secret that Senator Perry threatened for months to kill or arrange the false arrest of Ms Ortiz unless she recant her claims that he is stalking her. Why not just stop stalking her? All that requires of him is that he respect her wishes and leave her alone as she’s asked for years. She has no interest in hearing anything he  has to say or having any kind of relationship with him now or ever. She’s made that clear.

These are the actions taken by Ms Ortiz to try to get away from Senator Perry:

3. Moved from Dallas to Oklahoma frantically one day after the stalking became unbearable. She and her son literally quickly loaded everything they could fit in their car and fled the state. She didn’t even take the time to unenroll her son from school. They took care of that later over the phone.

4. Attempted to get a Protective Order in May, 2015. The Judge denied her Protective Order based on jurisdiction and non compliance with the Oklahoma Statutes requirement to file a police report. This is when Ms Ortiz made the matter public. She did it for safety reasons after keeping her mouth shut about the problem, but to a few close friends from 2011 to 2015. 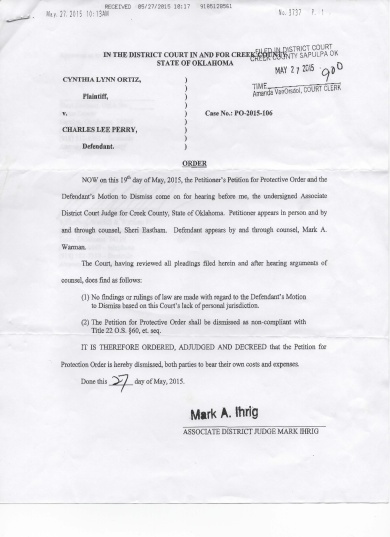 Senator Perry comes out and claims the denial was a “No Basis” Denial and that he is now “Vindicated” even though the Judge did not hear any witnesses or review any evidence. There simply was no hearing. The hearing was stopped the minute he granted the Senator’s Motion to Dismiss on jurisdiction. The denial was not due to lack of merit. Ms Ortiz filed a second Motion for a Protective Order in June or July, 2015 and the Judge did the exact same thing again.

5. Ms Ortiz then, on January 12, 2016 went to Tulsa Police to file a police report when the stalking, harassment and threats became much worse and it appears Senator Perry was attempting to kill her as he’d been threatening. She told nobody that she filed the report. Only the family member who went with her knew and he told nobody as well. There was no media blitz, there was instead every effort made on Ms Ortiz’s part to keep the matter private and confidential. Police reports are supposed to be private and confidential and yet, Ms Ortiz’s report somehow made its way back to Senator Perry before she filed a Protective Order in Tulsa county. Oklahoma state law allows victims of stalking to file in the County where they live or in the County were the incidents occurred. She was hoping to first talk to TPD Detectives in order to gain any and all additional information that might be helpful in making her case, such as blood evidence showing arsenic poisoning, and then file. While she waited for a call back, as she was only able to file the report with a desk clerk, she was arrested at her home in Oklahoma on the charges Senator Perry arranged also as he’d threatened. The charges, “Retaliating against a public servant for doing his job”.  A detective had not even called back to investigate her complaint and yet she was being arrested for a “false police report”? Det Liz Eagan called back on February 15, 2016 weeks after Ms Ortiz had been arrested. This was a clear violation of USC 18 Sections 1512 and 1513 as it appears Senator Perry intended to interfere with a police investigation in another state, prevent or delay Ms Ortiz (victim) from speaking with law enforcement and as such, caused the destruction of crucial evidence being video evidence and blood and hair evidence that would confirm or rule out the presence of arsenic. Why do that if he ‘s not stalking her and had nothing at all to do with what Dave Roberson was doing in Oklahoma. If Dave was not working for Senator Perry and not poisoning her, why have her arrested on false charges, now dropped, before a police investigation could commence intending to prevent or delay Ms Ortiz from speaking to law enforcement if he in fact had nothing to do with it. He violated her 14th Amendment Right to Equal Protection.

She texted and emailed friends and family and told them long before she even filed the police report of Senator Perry’s threats. Again, he went to great lengths to avoid simply going to court to prove he’s not stalking and allow the matter to be adjudicated. Also, her charges were dropped so again where she could have presented evidence that Senator Perry is stalking her, there was never a trial. Charges were simply dropped.

6. Ms Ortiz then, once the charges in Lubbock against her were dropped, filed a federal law suit. Again, Senator Perry is threatening to do whatever he can to shut it down rather than just coming to court to prove he is not stalking her. She’s notified her attorney of these new threats. Some threats are threats the Senator has made since the minute she returned home telling her he would find a way to lock her up and she won’t get out this time unless she is in a relationship with him and lies for him. This has been an ongoing problem for some time which IS the reason she filed the law suit to begin with. While Ms Ortiz was in jail, she and her attorney, Ted Hogan had many conversations about the fact that she wished no harm on the Senator, but simply wanted him to leave her alone and cease all contact and that everything she’d done since 2012 had been to achieve that end but that the Senator simply refused to cease and desist all contact. Her attorney then spoke to the DA at which time the provision was added to HER Bond conditions that Senator Perry had agreed to cease and desist all unwanted contact with her. They promised her his stalking, threats, intimidation and harassment would come to end finally. She was happy only to arrive home and it all started up again.

Her psychologist has stated, Ms Ortiz wishes no harm to the Senator, she simply has done everything within her power to get  away from him, in fact, her psychologist states the Senator is the one wishing harm on Ms Ortiz.

And now the threats again have intensified. Senator Perry has threatened to have Ms Ortiz arrested again since her return home, however , now that there is a pending Federal Law Suit, his threats have escalated, we believe, with the hopes to interfere with a Court Proceeding. He’s also told Ms Ortiz already that he will have the Judge dismiss the case on Demurer. Again, Ms Ortiz has exercised her legal options to end the Senator’s unwanted contact and interference in her life and again, the Senator appears to be avoiding court. The bond conditions allowing a provision that prohibits him from contacting her really has no bearing on him as the court order is on her, not him, however, there is no way possible the DA would have allowed that verbiage in her Bond Conditions but for the fact that Senator Perry admitted to engaging in unwanted contact and agreed to stop. He has not stopped. We all wish he would. How much easier and more enjoyable would life be for everyone if the Senator would simply cease and desist all unwanted contact and never ever bother her or her family again. Ms Ortiz has gone to great lengths to get away from Senator Perry. By now he should realize there is no desire at all on her part to have any kind of relationship with him and she wants no contact at all with him. If he is not stalking her, as she claims, why avoid court so many times where he can simply appear and prove he is not stalking her? There have been multiple times Ms Ortiz has filed something in court to obtain a Court Order against the Senator to stop his unwanted contact and he interferes every single time rather than just coming to prove he is not stalking her. Over and over he has done this. Why do that if he is not stalking her? Why not just leave her alone and make things easier for everyone?

If you just look at Ms Ortiz’s actions and Senator Perry’s actions you can tell something is terribly wrong with what he is doing. We trust the Senator, this time, will simply either stop contacting Ms Ortiz, get out of her life and leave her alone or come to court and prove he is not stalking her and allow the matter to be decided by a jury and adjudicated. Ms Ortiz truly wants nothing at all to do with him and never will again. If you can’t tell that by her actions, there is something terribly wrong with you. She wants nothing to do with him at all. 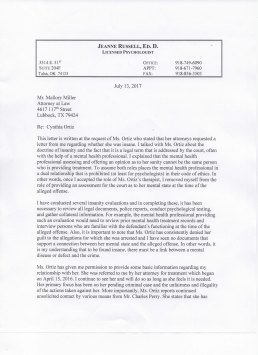 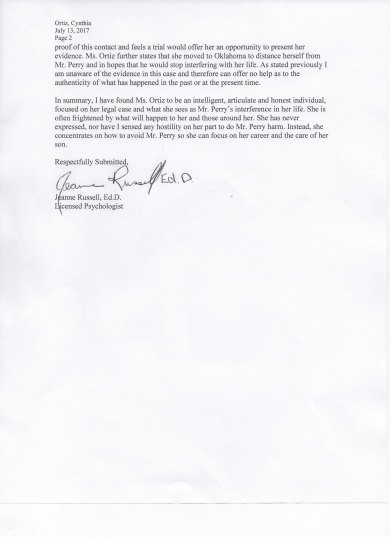 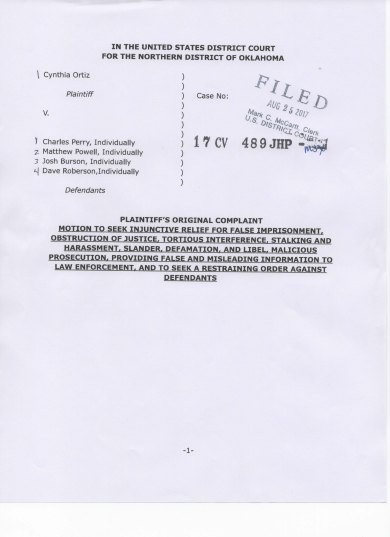