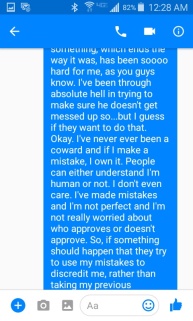 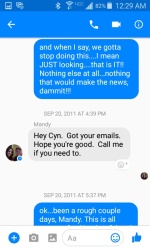 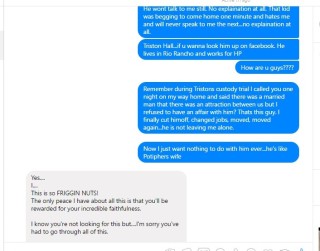 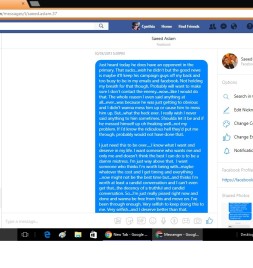 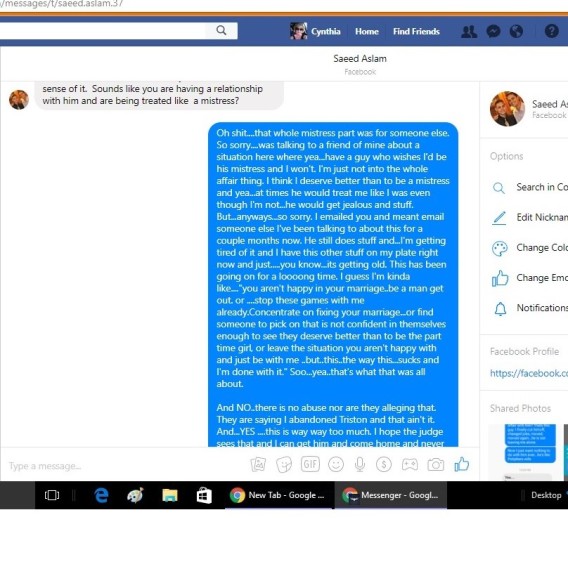 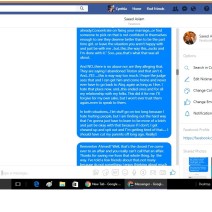 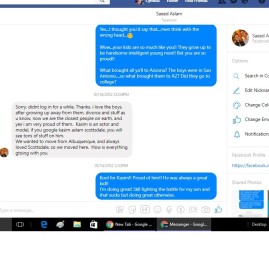 In December, 2011, that same year, she was representing Frank Morrison, as a candidate in the Lubbock County Commissioners race and through that campaign, rumors came back to her that she and Senator Perry were having an affair. She was upset because there was no such thing happening. There was no affair. She continued to state, “I won’t be anyone’s damn mistress.” She texts Senator Perry about the matter because the way the rumor came back to her indicated his staffer, Robyn Tepper and her husband Carl Tepper may have had a part in spreading the rumor. She texts Senator Perry about the matter and she was pissed. He wasn’t worried about it, which being that he is the one who is married and is an elected official who largely promotes himself as being a happily married family man, you’d think he would be. She is very vague. She did not want these false rumors going around so even in her texts, she never says what she is really talking about so that in case someone else saw the texts, nobody would really know for sure what she meant and yet, Senator Perry never asks her, “What are you talking about? What happened?” he never even asks because he knew exactly what she was talking about. He instead tells her she’s being paranoid. There are also emails between the two that you can tell something was going on particularly one in which the Ms Ortiz was expressing frustrations with one of her candidate’s failure to make crucial campaign calls and she’s asking Perry to explain the necessity of these calls to her client to which he responds “Should be here.” in that he wanted to see her. Rather than having a conversation on the phone or via email, he’s asking her to come to see him. Ms Ortiz states, “I have look through all my old emails and had not one other male colleague or candidate ask me that. No other man that I’ve worked with has done that. We simply discuss the matter on the phone or via email. I’ve never had anyone else in 20 years of working closely with male surgeons and elected officials, I have no other emails that say that.” 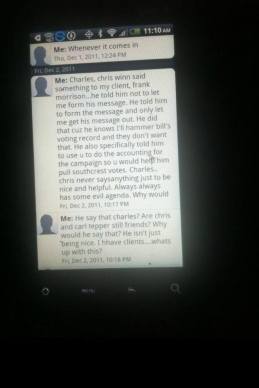 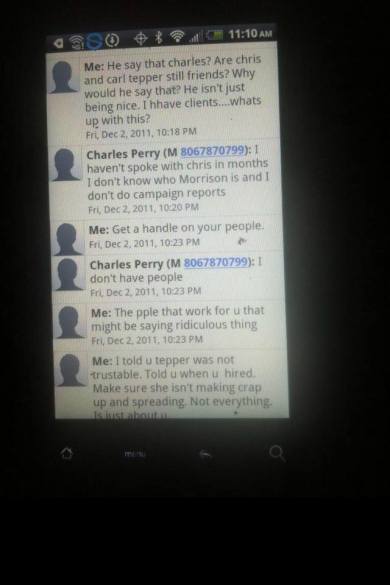 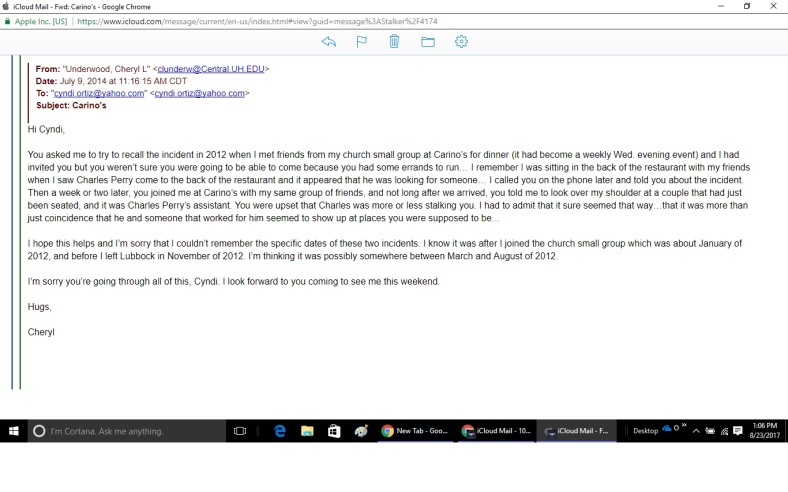 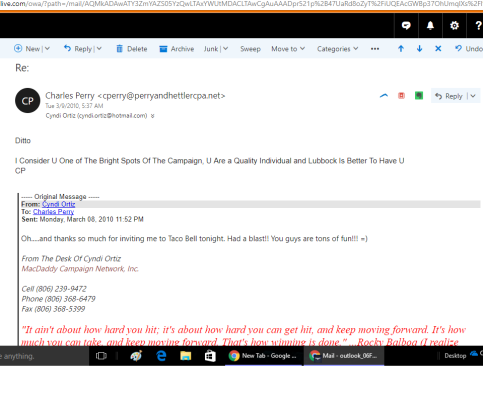 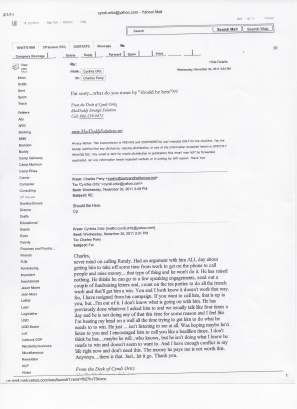 EPSON MFP image
And then later in her texts to Senator Perry about her taxes sent in January, 2013, she asks a simple yes or no question as to whether or not the IRS would accept deductions. Senator Perry is a seasoned accountant. He should know the answer to her question was a simple “Yes”. Her deductions were in fact accepted by the IRS. Instead, he rambles on and on about something that had nothing at all to do with her question, then slips in covert threats, “You lose. You are stuck. You have no control.” Stalking is not about love. Stalking is about control. Ms Ortiz was ending the relationship completely. This is when she abruptly stopped all political consulting so that she would not have be where the Senator was. She has not even voted since. Ms Ortiz had a 15 year successful career in political consulting and yet she abruptly ends it and does not even vote after that. She focused instead on medical sales, which she also had been very successful at all her life but when did not keep the Senator out of her life, she moved to Dallas and then ten months later, to Oklahoma when the Senator’s stalking became even worse. The more she tries to pull away, the worse and more crazy and more dangerous the stalking becomes. Ms Ortiz’s psychologist described her false arrest as a stalking escalation intended to cause her harm, to get her attention. Can you think of anything more cruel and hideous? 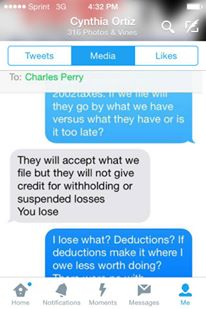 In light of all of this, and in light of the fact that even in the indictment against Ms Ortiz, no mention at all is made of a specific reason or legislative duty of Senator Perry is mentioned as a reason Ms Ortiz might wish to retaliate because there isn’t one. His failure to name a specific reason even in the indictment speaks to the fact that he knowingly provided false testimony in alleging her police report had nothing at all to do with his politics and the fact that he initiated that arrest supports the claim that he did in fact hire Dave Roberson to stalk, harass, and poison Ms Ortiz because his actions appear intended to delay and prevent her communications with law enforcement, her ability to provide evidence that he felt might incriminate him. Dave might just have been some weirdo in a bar had it not been for Senator Perry’s false arrest of his stalking victim. She had emailed and texted friends and family months before she even filed the police report for which she was arrested stating “Charles is threatening to kill me or arrange a false arrest. I have not done anything to be arrested for but he says he’ll find a way to arrange a false arrest. He seems to think it will give him “vindication” he wanted. False vindication is not vindication.” In fact, she texted that very thing to his proxy stalker/hit man, Dave Roberson. Even in her texts from October, 2015 through January, 2016 with Mr Roberson, there is no mention at all of any frustration from Ms Ortiz with Senator Perry’s legislative duties. The entire three months of texts are about her frustration with his stalking and her desire for Senator Perry’s stalking to stop.

So the interference in her life continues and has not stopped despite the legal action Ms Ortiz has taken to prevent it. In fact it seems almost worse. Ms Ortiz is concerned that because Senator Perry appears to have done some things prohibited by Federal law, that he will make every effort to make sure her case does not proceed including interfering with her income, as he has done for some time now, interfering with witnesses who might come forward to substantiate Ms Ortiz’s claims and to again for the fifth time avoid adjudication of this matter. If he wants vindication, all he has to do is come to court and submit evidence that he is not stalking her as she claims, did not arrange a false arrest, and did not obstruct justice and did not provide false information to law enforcement by misleading them to believe she had a political vendetta against him. That is not that difficult to do. Instead, we are seeing the same things we’ve always seen. Senator Perry going behind the scenes trying to manipulate, destroy and/or tamper with evidence, testimony and avoid court as he’s always done. We hope that stops and stops now. She did have signs of a break in at her home on August 7, 2017 and the phone she had with the most evidence of hacking was gone. That was something she complained about even before her arrest that she’d have signs of a break in and the only thing missing would be documents pertaining to Senator Perry’s stalking. So, here we go again.
For More Information, See Facebook.com/justice4cyn