Skip to content
This was the life of Ms Ortiz from the time she was 22 until she met Senator Perry and had the nerve to turn down his romantic advances. One of the many government reform projects she worked on tirelessly for many years with no compensation. The issue needed attention. Her efforts were in attempting to improve Medicare coverage for treatment of Lymphedema and Vascular Disease. The current coverage is very very behind today’s current technology that would cost much less. This was something she worked with many Federal legislators in New Mexico and Nevada with including, but not limited to, Senator Harry Reid, (NV), Senator John Ensign (NV), Congresswoman Heather Wilson (NM), Congresswoman Shelly Berkley (NV), and Congressman Jon Porter, (NV). Ultimately, Treatment Guidelines she and her colleagues developed for her clinic were sent to the CMS Panel and published on a Medicare Website. The peer review was such that there was not enough scientific data available, which also frustrated Ms Ortiz, but that Ms Ortiz’s evaluations made logical sense. Keep in mind Ms Ortiz was successful both in her medical business, for 20 years, and in her work in government reform, for 15 years in 3 states before she ever met Senator Perry. She walked away from all of this towards the end of 2012, first of 2013 to distance herself from the Senator after he failed to respond appropriately to reasonable conversations the two had about not having an affair. Nobody does that, unless there is some danger involved and they are trying to hide. She then moved and moved again and began working in strip clubs where she thought the Senator would never bother her, being that he is a Baptist Church Deacon. She was wrong. He clearly did. There is a massive difference in Ms Ortiz’s life since meeting Perry. Her life has suffered one profound loss after another. Who wouldn’t want to get as far away from that as possible???
Click Here To See CGS Medicare’s Posting of Ms Ortiz’s Treatment Guidelines
Click Here To See Peer Review And Overview of CMS Panel’s Comments of Ms Ortiz’s Treatment Guidelines
Kevin Crawford is a Orthopedic Sports Surgeon for Texas Tech University Football Team and he has a private practice in Lubbock as well. 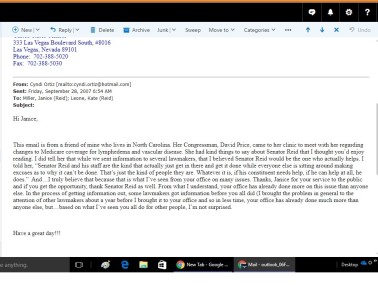 Despite the fact that Ms Ortiz was a Republican and Senator Harry Reid of Nevada a Democrat, she held Senator Reid in high esteem and found him to be more helpful, respectful and kind than many of the Republican elected officials she sought to sponsor a bill that would reduce Medicare spending. Ms Ortiz greatly admired and respected Senator Reid and his staff and enjoyed working with them probably more than any other office she worked with. Her issue was neither Republican or Democrat and frankly none were. She worked on this health care issue, and after learning of the abuse and neglect suffered by children in her parents care at their faith based teen rehab program, she worked with Senator Michael Padilla, (NM-D) to address licensing and oversight of faith based teen rehab programs in New Mexico as her parent’s organization was one of two that had students reporting incidents of abuse and neglect. This issue is also neither a Democrat or Republican issue. Ms Ortiz was very good and just focusing on addressing the issue and building relationships and not being side tracked with party politics. She was in it to help people and nothing else.
Click Here To See KOAT’s coverage of CPS Investigation of Ms Ortiz’s Parents
These are Affidavits From Former Staff and Students of the faith based program Ms Ortiz’s Parents Operated. These individuals provided Affidavits and others sent many emails and made phone calls to Ms Ortiz relaying incidents of abuse and neglect. She was upset to hear this obviously. She had no idea and spent lengthy amount of time working with NM CPS, Henry Varella, who was a Constituent Liaison for Governor Martinez and later the Constituent Liaison for NMCYFD or CPS. When discovered NM law prohibited CPS from becoming involved in child abuse at faith based teen rehab facilities, she reached out to Senator Michael Padilla, Democrat Senator in NM and he did introduce a bill. The bill needed changes however because of the difficulties Senator Perry has caused Ms Ortiz, she’s been unable to continue to help these kids, which is obviously unfortunate for more than just Ms Ortiz. 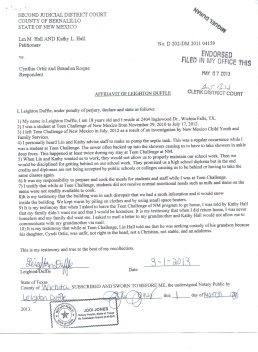 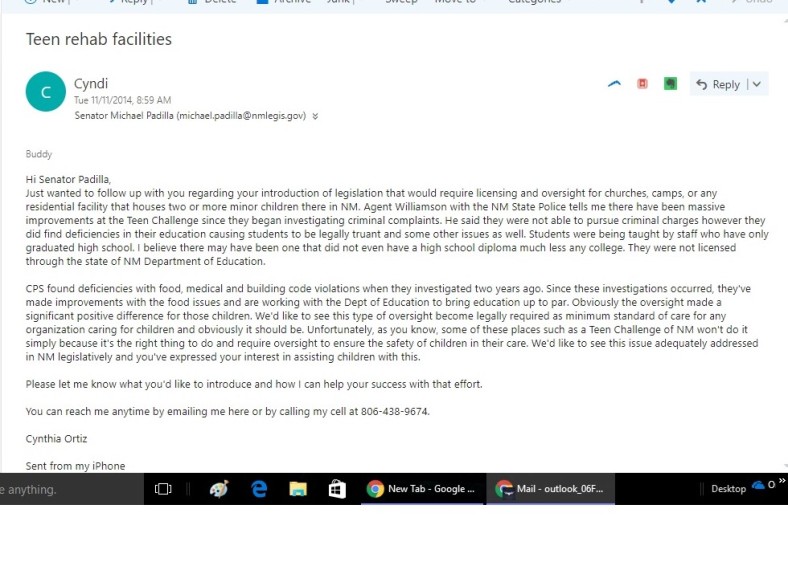 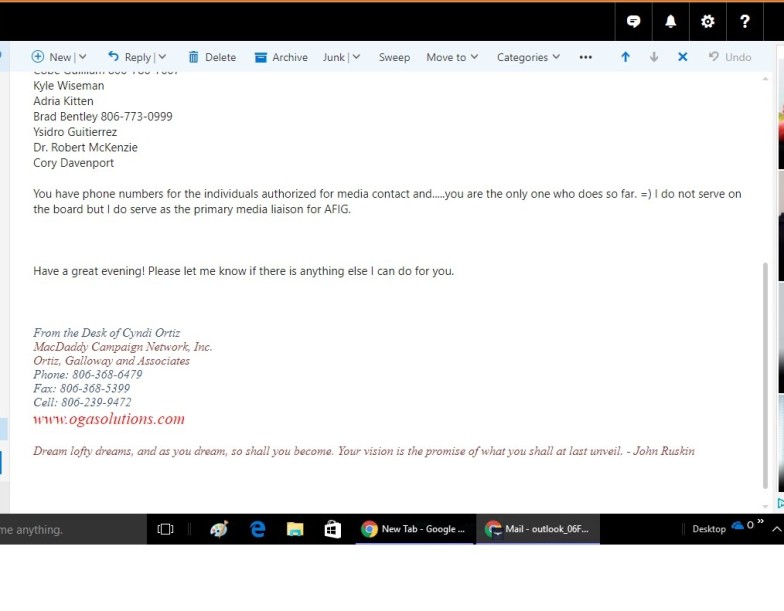 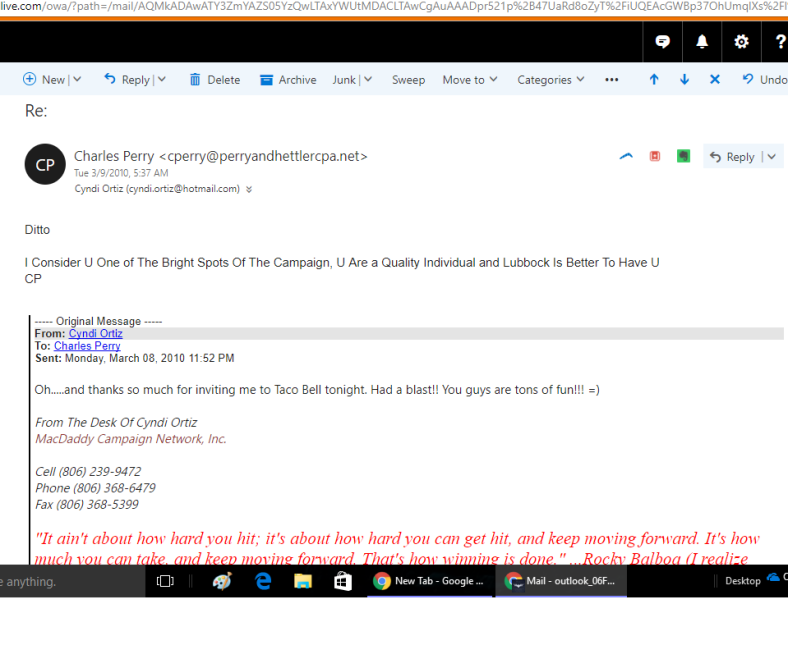 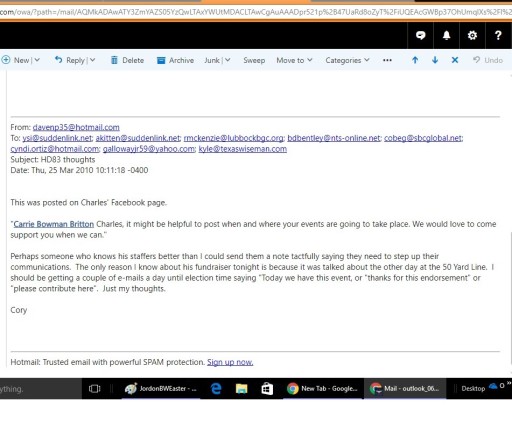 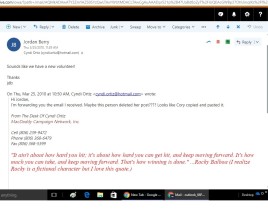 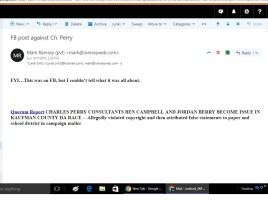 Then, in June, 2011, Senator Perry had become to open in public with his feelings for her so she spoke to Ben Campbell about the matter. Campbell then threatened to ruin her business. She was confused. She was trying to prevent a catastrophe for his client and he responded by threatened to ruin her business?? She immediately told three close friends, two living in other states that she grew up with in NM, that would result in no lost votes for Senator Perry and the third, close friend Lori Daniel in Lubbock. The two were together all the time. Altogether, she told three people in Lubbock until right before she moved mostly because they saw Senator Perry do something that was off and she had to explain the situation or she needed their services to deal with getting him to leave her alone. There was no media blitz, there was nothing said publicly at all until the end of 2014 first of 2015. She addresses the matter with Jordan Berry in a facebook message dated September 20, 2011. Later, her friend Lori, having watched Perry carry out the threat to ruin her business expressing fear of him ruining her’s should she provide testimony. 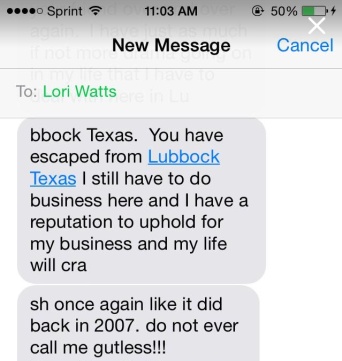 You can see the vast difference in Ms Ortiz’s life since she met Senator Perry and its sad. The devastation he has intentionally planned and executed and caused for her is very very sad. Hopefully, she’ll receive the court remedy she needs this time around and will no longer have to deal with this man forcing himself into her life and on her. She wants very very much to live her life without Senator Perry in it. She never wants to hear from him again ever. After an entire life of success and a history and building relationships, business and a reputation, Senator Perry had no right to rob her of that and you can see exactly when he began his unsolicited attack on her life. There is a marked difference in the events that occurred and her reaction to those events beginning in 2011. She left Lubbock, she left her career, she left Texas to get away from him, not fight, but to get as far away from him as she could. She’s done all she can do and now its up to the courts to provide some much needed relief, finally, for her and her family. She’s had almost every civil right afforded her under the US Constitution completely obliterated in her life by the Senator. She has the right to her privacy and to live her life without him in it if she so desires and I think she’s made it more than clear, that IS what she desires.