Emails to Ms Ortiz’s attorneys and friend telling them of Senator Perry’s threats to kill her or arrange a second false arrest in August 2016. In October, 2015 she emailed her ex husband and told him of the same telling him, “I have not done anything to be arrested for but he’s threatening to arrange a false arrest”. This was three months prior to when she even filed the police report on January 12, 2016 for which she was arrested, as threatened, the charges dropped recently. It appears Senator Perry threatened it, planned it and carried it out we believe to cover up his attempt to kill her. Threatening someone with a false arrest in order to coerce a false statement is coercion. Dave told her “Recant your stalking claims or I will put you in the lake. Do you like boats?” This took place in the very first conversation the two had at her work. Dave came to her work, told her Senator Perry sent him to speak to her and the threats and the harassment ensued. If Senator Perry carries out his threats again, to coerce a lie or extort a relationship with Ms Ortiz she does not want to be in, this does constitute a violation of Title 18 USC. It is an unlawful act. Ms Ortiz has asked Perry to stop contacting her, there was an agreement between all parties that he would before she left Lubbock as evidenced in her bond conditions, otherwise, why on earth mention his name as not to contact her in HER bond conditions, however his threats continue to be a very big problem and area of concern. All of his contact is unwanted and of big concern and a threat to her safety and well being.

These are emails including screen shot attachments showing where Senator Perry was typing these threats in her phone. He did say in one “I write covert”. Ms Ortiz’s computer expert advised her he’s had a program custom written that allows him to usurp her autocorrect and autosuggest to communicate with her via hacking. The bottom line is Ms Ortiz ended her relationship with the Senator in December, 2012. She abruptly ended her political consulting career of 15 years, in three states, as well to distance herself from him. Senator Perry is a married man, deacon of his church, elected official and an affair would be inappropriate. She simply rejected him. Because he continue to harass and stalk her, she moved to Dallas in November, 2013 to further distance herself from him. She has not voted since 2012. She began working in strip clubs hoping since he is married and a church deacon he would not bother her there. She thought that would be the one place he would not go. She was wrong. As such, she moved and her son literally in September, 2014, loaded what they could fit in their car and fled Texas to Oklahoma where family is. That didn’t stop him from stalking and harassing her. She then sought a Protective Order in May, 2015 which was denied on jurisdiction not due to lack of merit as the Senator claimed. The judge’s order stated he lacked jurisdiction to hear the case therefore no evidence was shown and no arguments heard. This made Senator Perry angry, thus, the threats to kill her or arrange a false arrest ensued. He has been out to punish her, besmirch her, and ruin her life for a long time. He has caused catastrophic loss after catastrophi loss for many years.

These are emails sent to her attorneys and a friend in August, 2016 after she was promised the Senator would never again contact her as is evidenced in her bond conditions. Why include in HER bond conditions that Senator Perry may not contact her unless there was an admission of guilt on his part and a promise to cease and desist all contact, all stalking, all threats and all harassment? As you can see he did not keep his promise.

These are emails to her ex husband advising him of the threats to kill her or arrange a false arrest in October, 2015 three months before she ever filed the police report with Tulsa PD after it appears Senator Perry attempted to kill her and failed. The man stating he worked for Senator Perry admitted to Ms Ortiz in texts to having arsenic given to her and she was ill. Three months is a long time to know someone is attempting to arrange a false arrest, not knowing what the arrest would be for, and long before the act took place for which the person was in fact arrested. There was premeditation involved. Ms Ortiz didn’t file the police report with TPD until January 12, 2o16 and yet in October, 2015 she tells her ex husband “Charles is threatening to kill me or arrange a false arrest although I have not done anything illegal so I’m not sure what he would have me arrested for.” Senator Perry again, after her return home began making the very same threats. He has told her she can have Paris or Prison. He’s told her she will be in a relationship with him, lie for him or he will kill her or arrange a second false arrest. Every little girl dreams of growing up to meet a prince charming like this. Ms Ortiz has other interests and that man has been threatened and harassed as well. What would make an individual so deeply desperate that they would attempt to bully and extort with threats of death or one false arrest after another, plan it, attempt to carry it out to force himself on a woman who has made it clear for four years she wants no relationship with the person at all, no contact from the person at all, no harassment, no stalking and would like Senator Perry to cease and desist all of this? What would make an individual so desperate as to behave this way? A policeman told Ms Ortiz guys like this have serious emotional and mental problems. I think that point is something Ms Ortiz would agree with. Many people are rejected every day and yet the let go, move on and find someone to be in a productive relationship with however for four years, Senator Perry has forced himself into the life a woman that wants nothing at all to do with him. Why be in a relationship with someone who rejects you every day? No normal mind can comprehend why anyone would do that because it is not normal to do that. I think anyone in Ms Ortiz’s shoes would do the same as she. Most people when harassed, bullied, threatened, intimidated and had privacy violated for as long as Ms Ortiz and her son have would fall apart. Most people also when confronted with a choice, as Senator Perry has done, with a person that threatens, harasses, tries to murder you then arranges your false arrest to cover it up, invades your life and your privacy the way Senator Perry has done to MS Ortiz or a man that tells you he thinks you deserve better than to have to live your life being harassed and threatened by this guy, its not even a choice. Senator Perry is a toxic unwanted forced presence and source of much stress and anxiety. Nobody wants a man like that. That requires no thought at all and there should be no question in anyone’s mind or doubt in anyone’s mind what Ms Ortiz wants for herself and her son and her life and it very much includes being able to live life without Senator Perry in it.

See emails of October 27, 2015 to her ex husband telling him of Senator Perry’s threats to arrange a false arrest or kill her long before she filed the police report of January 12, 2016 for which she was in fact arrested, charges later dropped. Being that the Lubbock DA and the Judge agreed to the terms of her bond conditions which state Senator Perry may not contact her, it appears they are both aware there is a problem otherwise, why do that? 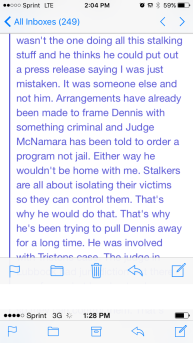 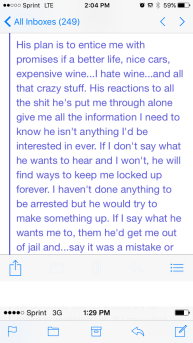 Below is an Affidavit from her son also confirming Ms Ortiz was threatened with death or false arrest long before the threats were carried out by Senator Perry.