In May,2015 Ms Ortiz tried to get a court to give her an order of protection against Senator Charles Perry for stalking and harassment. The judge did not hear testimony or review evidence. He simply refused jurisdiction. In the months following, Senator Perry appears to have hired a hit man, a man identifyimg himself to MsOrtiz as Dave Robertson, who approached her at work in October,2015. Robertson ordered Ms Ortiz to recant her claims or he would “put her in the lakr”. He then began poisoning and assaulting Ms Ortiz and admitted to such in texts. Ms Ortiz filed a police report in Tulsa where the incidents occurred intending to make another attempt to get an Order of Protection against Senator Perry. The report was filed with a desk clerk who advised her a detective would be assigned and call her back to properly collect evidence andvreview evidence with Ms Ortiz. Before she even got a call back from a Tulsa PD Detective, she was charged with a felony crime in Lubbock where Senator Perry resides and taken back to Lubbock jail. Ms Ortiz had no prior arrests or history of mental illness. She was charged with Filing a false police report in retaliation for a public servant, Charles Perry doing his job. There had not even been an investigation into her complaint as Perry had her arrested before an investigation commenced. Those charges against Ms Ortiz were dropped yesterday. It appears Senator Perry, angry about her rejection of him and her attempt to get a court Order of Protection against him, tried to kill her, then had her arrested to cover it up. He had threatened to kill her and arrange a false arrest for some time, her emails and texts show. He really has not stopped with the same threats.

The case against Ms Ortiz for retaliation intending to harm Sen Perry politically by filing a false police report was dismissed, however, it was dismissed without predjudice. Ms Ortiz is concerned Sen Perry will try to harm her again, to set her up for a second try since this effort failed. She is afraid even to call police when he places her in danger. She has documented evidence of Sen Perrys threats even long before her arrest threatening her with death or arranging a false arrest. He really has not stopped threatening her with a second attempt at both death or arranging a second false arrest, in fact, he has changed the reasons he says he would have her arrested again probably twenty times over the past year ranging from attempting to bait her out on murder for hire, to which she has vehemently declined repeatedly, manufacturing evidence, prostitution, a minor infraction that might be called prostitution that could be something as simple as taking her shoes off in the gentlemen’s club where she worked but in some jurisdictions is legally deemed to be prostitution. He has threatened to plant drugs on her however she has never done drugs of any kind. She barely even drinks. The latest threat to Ms Ortiz from Senator Perry was that he would have her arrested for cyberbullying for her side of the story being made public here have been many over the past several years. We also understand Sen Perry has done similar to what he did in the indictment where he took innocuous tweets and claimed he was the one in danger one being a quote from Meredith Gray of Grey’s anatomy. He has taken again, quotes from Ms Ortiz’s personal facebook page that do not have his name on them anywhere, have nothing at all to do with him, or one that specifically says “This quote is not related to Perry. Not everything is about him.” She has derived strength from other who have gone through adversity and most of her quotes are from those people or depictions of individuals who overcame serious adversity. It goes without saying Senator Perry has caused a great deal of adversity for Ms Ortiz and her family. Itis certainly appropriate for her to derive strength from quotes from other in similar or worse situations. She has blocked Sen Perry from her facebook account more than once, she has hidden her friends list even from her facebook friends therefore his knowledge of her content on her personal facebook page could only come be obtained through illegal means such as hacking her facebook account. In other words, Senator Perry does not even have direct access to content on Ms Ortiz’s personal facebook account, nor can he gain access to it through one of her facebook friends without having hacked her facebook account to see who her friends are and how to reach them to ask them to get it for him. Nobody, not even her facebook friends have access to that information. She blocked it years ago after an individual picked through her facebook friends and sent them all unwanted political messages. It has been blocked for many years. So any content Sen Perry has from Ms Ortiz’s personal facebook account was most likely not even obtained legally, there is nothing with his name or about him posted at all. He is up to his same tricks. No surprise there.

The fact of the matter is that this behaviour of Senator Perry is all consistent with acts that constitute stalking and harassment. Sen Perry was rejected by Ms Ortiz. She quit her career, moved away, changed jobs, moved further away all to get as far away from Senator Perry as possible. She has done everything within her power to get free of him. He simply refuses to leave her alone in compliance with the law. Ms Ortiz kept her mouth shut for four years while trying to reason with the Senator to get him to cease and desist all contact with her. Only when he escalated his stalking, harassment and threats did she make the problem public in order to protect her safety. She tried to present evidence against the Senator during the Protective Order hearing of May, 2015, when she filed the police report in January, 2016 for which she was arrested and then again was looking forward to presenting evidence of the Senator’s stalking and harassment during the criminal trial he brought against her. Every time the opportunity arises to present evidence showing the Senator is stalking, harassing and threatening Ms Ortiz, Senator Perry shuts it down. Three times he has obstructed evidence rather than effectively refuting it. There is a reason he does this. Ms Ortiz has done nothing but ask Senator Perry to let go, move on, and leave her, her family and her friends alone and cease and desist all forms of contact. There is something terribly wrong with a man that that refuses such a simple reasonable request 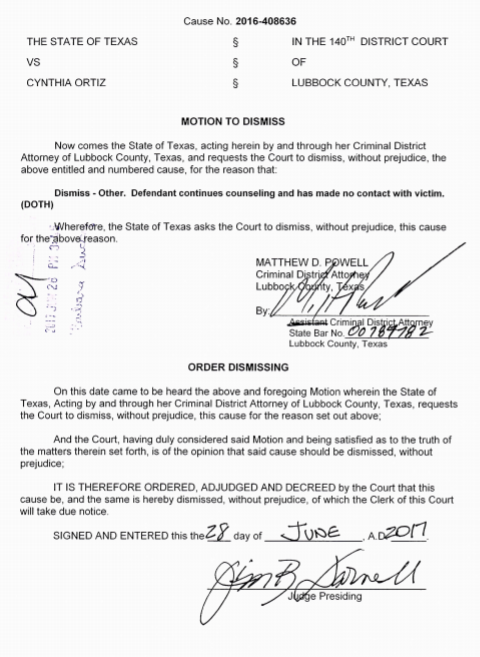 Ms Ortiz’s psychologist (doctorate in psychology) has stated Ms Ortiz does not display any hostility or desire to harm the Senator. He instead is the one intending harm to Ms Ortiz. 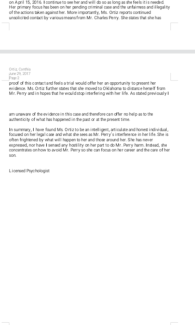 Ms Ortiz has made it clear for many years she wants Senator Perry to cease and desist all contact with her. He simply seems obssessed and refuses to leave her and her family alone.