During the months of November 2015 through January 2016, Ms Ortiz began experiencing unusal incidents of immediate extremely severe headaches, dizzyness, metal taste, nausea and vomiting imnediately after injesting drinks purchased by men posing as “out of town” customers at her work who purchased drinks for her. Because Dave Robertson had come into her work and introduced himself as Senator Perry’s hit man, she texted him of the problem initially soft balling him. As the incidents continued, she googled her symptoms she became much more confrontational and texted Dave asking him if she was being given arsenic and phenol barbital to which he answered “yes”. Dave had introduced himself to Ms Ortiz by saying “Charles is consumed with the fact that you ruined his facade. Recant your claims that he is stalking you, or I will put you in the lake. Do you like boats?” She had just met Dave and outside of Senator Perry, Dave had no motive at all to want her dead. Senator Perry on the other hand was angry that she sought an order of protection which raised a cloud of suspicion around him with stalking allegations. He could not possibly have known in advance how her body would react in that it rejected the poison. It could have killed her or led to such severe brain damage that she would no longer be able to function.

Texts between Ms Ortiz and Dave Robertson can be viewed here:

In the texts between Ms Ortiz, she continues to ask him to end the stalking, harassment and interference in her life attempting to reason with him explaining how no good was coming from their actions nor did it appear there was any point to the stalking. If it was to bully her into a recant for Perry’s campaign,it did not appear to have even affected his campaign and he certainly was never going to stimulate a romance or affair with Ms Ortiz so what was the point in continuing these intrusive, offensive, threatening acts against her, she explains.

Ms Ortiz could begin to see another attempt at a Protective Order was needed. She was scared to death at this point. She made every effort to keep her intentions from Senator Perry and Dave telling him she had no intentions of attempting another protective order. The last thing she wanted was yet more interference from Perry in attempts to get get free of him and the protection from his stalking, harassment, threats and apparent danger he continued to force on her.

Oklahoma law allows victims to seek protection in the county where they live or the county where the incidents occurred. She was not going to appear in front of the same judge who already decided he believed he did not have jurisdiction so she wanted to file in Tulsa County where the incidents occurred hoping to get a different judge. During the first attempt at a Protective Order the judge also denied due to non compliance with the laws requirements of the filing of a police report. She had filed but only had the case number available in court which the judge would not accept. 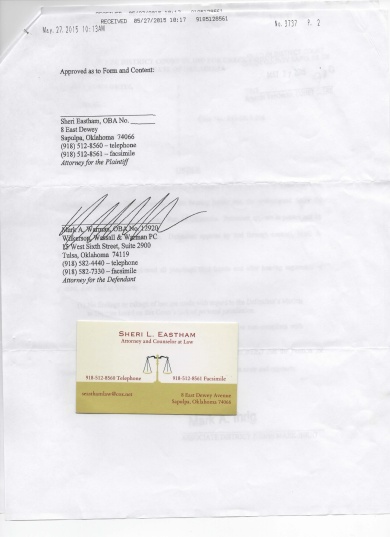 She was going to do things different this time to avoid the mistakes of her first attempt and talk to a detective hoping to glean something that might be added to her pleadings leading to success this time.

On Jaunary 12, 2016 Ms Ortiz and a family member who had seen her symptoms, went to Tulsa Police Department to file a police report in compliance with Oklahoma Law. They only spoke to a desk clerk. They clerk advised “We will enter your report into out computer, assign a detective to investigate your complaint, that detective will contact you once assigned to have you come in to give a statement and review any evidence you may have.” Ms Ortiz waited for the call back. In her report she referenced the texts and video surviellence evidence showing Dave’s harassment at her work in her report stating the problem had been ongoing for some time. While she was waiting for a call back so the investigation could commence, on January 29, 2016, police came to her door, told her they had a warrant to arrest her out of Lubbock, Texas for filing a false police report. False police report? But how could anyone determine the report was false if Ms Ortiz had not even received a call back from TPD detective? Nobody had seen her evidence. How could this happen? Had a detective even been assigned yet? Lubbock had no jurisdiction over crimes occurring in Tulsa Oklahoma and Ms Ortiz had not lived in Texas since 2014. How could she be charged with violating a law in a state where she did not live for complying with the laws of the state where she did?

The charges out of Lubbock were “Filing a false police report in retaliation for a public servant doing his job” Allegations include Ms Ortiz made false claims of being poisoned, having her car vandalized and her home broken into. There was no investigation of any of these incidents. In favt, Ms Ortiz’s arrest caused the permant loss of crucial evidence including but not limited to a forensic pathologists inspection of her blood to confirm or rule out the presence of arsenic. She had told only close friends of Senator Perry’s stalking for four years. She abruptly ended her political consulting career in 2012 and has not even voted since in order to distance herself from the Senator. She moved twice each time further away trying to get away from Senator perry and now he was accusing her of making all this up and making many massive life changes to get away from him over a political vendetta? This was clearly unjust and another attempt by Senator Perry to bully Ms Ortiz into a lie, a cover up and to besmirch her. 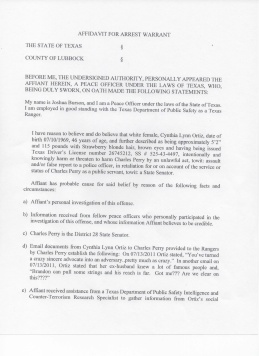 Ms Ortiz called her son and said, “You know what Charles has been threatening to do for months now?” “Yes” he replied. “Well, he did it. I am in jail. Call family as we have discussed.” She told him. Ms Ortiz had already a year or so before these incidents sat down with her son and family and told them of Senator Perry’s threats to kill her or arrange a false arrest and preparedfor the care of her son in case he carried out these threats. Everyone already knew what to do. They had hoped he would not, but prepared in case he did. She had emails and texts months before notifying friends, family and her ex husband of Senator Perry’s harassment and threats to kill her or arrange a false arrest not just of her, but her son as well. She was prepared but still in shock nonetheless. It apeared he tried to kill her then had her arrested to cover that up. A TPD Detective, in fact may not yet have been assigned. No investigation had commenced. While Ms Ortiz was already sitting in Lubbock jail, TPD Detective Eagan called on February 15, 2016 and notified Ms Ortiz she was the detective assigned to investigate her complaint of stalking and harassment and requested to see the texts Ms Ortiz referenced in her police report.

As a direct result of Senator Perry’s actions, Ms Ortiz lost crucial evidence and some was evidence you would think Senator Perry would want. Being that he accused her of falsely claiming she waspoisoned, its named a a reason to substantiate the indictment, you would think he would demand the forensic inspection of her blood sample to prove her story was made up but thats not what he did. Instead his actions appear to show conciousness of guilt. Dave would otherwise just be some weirdo in a bar that had no association at all with Senator Perry. But because Senator Perry somehow gained access to what is supposed to be a legally protected private and confidental police report, and had Ms Ortiz arrested before there could be a complete and thorough investigation including but not limited to the inspection of her blood by a forensic pathologist, which is standard protocol in a complaint such as her’s, it appears he had prior knowledge of what the results would be because it appears he gave the order to have her poisoned in attempt to carry out the prior threats to kill her.

It looks like Senator Perry was angry at Ms Ortiz for rejecting him, for trying to get a court order of protection against him, tried to bully her into recanting and lying for him, tried to murder her when she refused, then had herbarrested to cover that up. He continues to threaten to kill her or arrange a second false arrest if she continues to reject him and if she refuses to plead guilty. He has had his people attempt to bait Ms ortiz out on murder for hire, beat up for hire, prostitution, he told her he would plant drugs on her being that she has never done drugs of any kind, all unsuccessfully as Ms Ortiz is simply not a criminal. And now that she is getting her side of the story out, Senator Perry has threatened to have her arrested for cyberbullying. Ms Ortiz has continued to be subjected to this constqnt daily harassment for seven years. I think at this point she has a pretty strong case for reckless endangerment, tortious interference, slander, defamation, and more against the Texas Senator and those who helped and those who failed to intervene and keep her safe as is required by law.

MS Ortiz ha sn had not just one but several of her Constitutional rights assaulted by Senator Perry. She was denied her 14th Amendment Right to Equal Protection and Due Process in being arrested instead of protected from what appears to be attempted murder. Her First Amendment Right to free speech and freedom to tell what is happening to her is under threat and attacked by a man who simply has much to hide. She is not a second class citizen who deserves to be robbed of her rights, all just to cover up a Senators bad decisions. All he has to do is get out of her life and leave her alone. That is not hard to do.

This is a text widget, which allows you to add text or HTML to your sidebar. You can use them to display text, links, images, HTML, or a combination of these. Edit them in the Widget section of the Customizer.
Loading Comments...
Comment
×
%d bloggers like this: